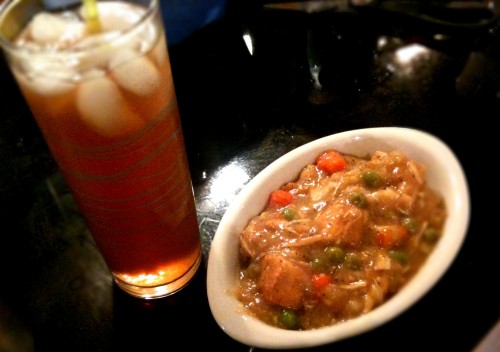 I can’t always be bothered to take photos of the entire meal from prep to finish, especially when it isn’t my recipe! Plus it’s a crock pot meal and believe me, there’s a good six to eight hours when they aren’t exciting in the least. Chris over at Ramblings of a Hopeless Khowaga posted this recipe for slow cooker chicken n’ dumplings that was passed along to him. Even though we aren’t feeling the bite of chilly fall/winter yet, I’m loving my crock pot meals and this one was too easy.

While I might pester him for more specific measurements, and I skipped the cornstarch completely as he didn’t mention it–it still made for an amazing dish. The vague spices ingredient is really a doorway for you to give it your own additional flavor. I tossed garlic cloves into mine before cooking and then some diced garlic in after the biscuit dough for both the sweet and the bite. This recipe would easily make enough for a week for one, a few nights for a couple and perhaps dinner and next-day lunches for more than that.

The iced tea was more an afterthought to show off some of the new glasses I bought at IKEA, but rest assured, it was made in the Southern way: brewed with flavor and loaded with sugar. (Or in this case artificial sweetener, but in iced drinks, you can’t tell.)