The RAMW has just announced UNLEASHED. Over 100 area restaurants will be offering specials during the week of March 1-7, 2010. 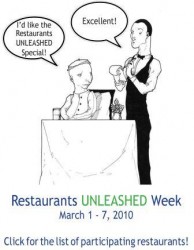 This will be a great way for patrons to unleash the pent up dining passions that have been so constrained over this winter […] it’s not just dining; this is also about social contact, conviviality, decompression and so much more that we tend not to think about until it is taken away. Think of our Unleashed week as an intense, really big, group therapy session.

A quick read over the list shows a nice selection of participating restaurants, so it shouldn’t be hard to find a qualifying table. Many are offering one of my favorite things, multiple-course fixed price menus. Of course, those restaurants may not whip out the steak and lobster, but I think the lessons of many Restaurant Weeks past in this area have taught them not to scrimp–and not to place upcharges on everything.

During the snowstorms, there was a lot of twitter buzz over which restaurants were open/closed and which were still debating it. Even those diners that did make it out found that many places didn’t get their usual deliveries and weren’t fully stocked. Hopefully the Unleashed week of specials will get more people out to eat and help more than a few venues recoup the social if not financial capital that being snowed-in took away. In any case, most people in DC hardly need a reason not to cook, but these specials might serve to sweeten the pot.