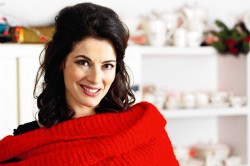 In what I’m sure is a promotional move for her latest cookbook, Nigella Lawson has penned a short article for the Wall Street Journal on her essential cozy kitchen.

‘Kitchen’ is probably one of the most evocative words in the English language. Yes, it is a noun denoting a room and its purpose, but more than that, it is a word resonant with symbolism. It conjures up warmth and welcome, safety and security, in short, the very notion of home.

If a kitchen is not comfortable nor will you be. So make it suit you, and not the universal customer. Make it an extension of your personality. Above all give yourself, and it, over to the chaotic coziness that in a cold universe is the kitchen’s soul-saving grace.

She goes on to mention some of her kitchen essentials, a knife magnet block and her favorite tool, the mezzaluna–which she actually uses regularly on her televised segments. Unfortunately for many cooks and food lovers I know, she also mentions customizing a kitchen which is not an option available to that many people though we’d love it!

And even though Nigella doesn’t believe in a kitchen full of the latest gadgets, I admit to buying up more than a few and then throwing out the ones I barely use. Ok… trying to throw them out. Thank goodness for my recent move encouraging me to lighten the load of kitchen equipment. But one gadget-laden thing I have bought recently is this poster from Pop Chart Lab which reads like an intervention for Kitchen Gadgets Anonymous. 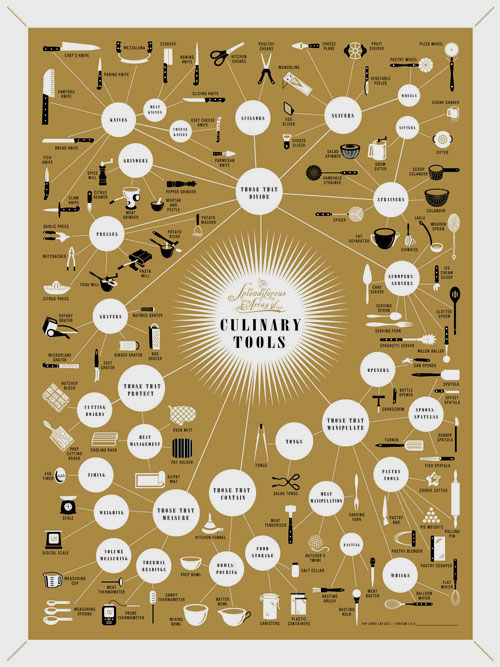 I’m not going to admit to how many items on that list I already own or have owned at one point. But I will say that I’ve never owned a melon baller or pie weights. No comment on the rest of them, but at least I’ll have a guide gracing my kitchen to keep score–I mean track. And if I have any food neophytes over for a visit, they’ll have this handy chart providing a visual reference when I ask them to hand me something instead of staring blankly and handing me a pairing knife when I demanded for a shrimp deveiner.