I know, I know, I already posted a recipe for “The Best” Sangria a year ago that remains one of my most visited pages on this site. Well, no disrespect to America’s Test Kitchen, but while their recipe is good, I think I’ve improved upon the original. As much as I see Sangria as a make-ahead recipe, I wanted to change it up a little bit that would allow it to only have to sit for a short time but release the “bite” that wine can sometimes have. Also, I wanted it to really taste more like the drink that you’ve made when you have a few bottles left open the morning after a big meal with friends. 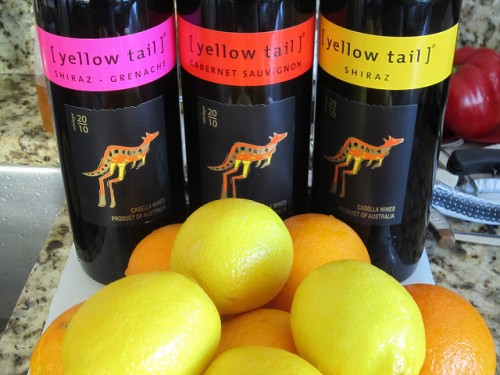 Since mentioning Sangria as a good go-to Summertime party drink, many people would tell me how they used to make Sangria in college–always college–and it generally involved adding vodka, brandy or grain alcohol to wine, fruit optional. And while there’s nothing wrong with boozing up some wine, I didn’t think that would create a smooth and sip’able drink. Still, there was some wisdom to be had in adding either more or diverse liquor to my original recipe. I also figured, if this was a next day drink/punch, one wouldn’t necessarily have all the same type of wine lying around, right?

Thankfully, I had a party to attend, so tripling the amount of Sangria–using three different wines–wasn’t a bad thing and it’s a lot easier to transport 3 liters of Sangria in a bucket than trying to funnel it back into bottles. It vanished rapidly, clearly a big hit and I was told by a friend that it was better than my usual, so the recipe is a keeper!

Better than The "Best" Sangria

* If you’re not in the mood to pick over oranges in the produce aisle, pick up a 3 lb. bag of oranges that don’t look too bad. It should contain 8 or 9 oranges and you’re all set. Juice the ugly ones and slice the pretty ones.

The type of wines and liqueur you use is up to you, obviously, but the above combo is a winner. It makes a sweet enough drink to have right away and a smooth enough drink to have the next day. If you really want a “quick” batch, I’d use all Grenache blends as they have less acid and tannins so already come with less of a bite, even when blended with stronger reds. Removing the fruit helps the Sangria keep longer–without added bitterness–and makes for a boozy snack that still lets you say you’re getting a daily requirement of fruit… right?

After my last party experience, I’m tempted to suggest that you double the above recipe so long as you don’t throw out your back trying to move it from the counter to the fridge. If there are other libations available, it should last the evening for a party of 10 or so, but don’t count on there being any left over to take home with you. The summer may be almost over, but consider this recipe–whether served in a bucket or tastefully appointed punchbowl–for those “last hurrah” and Labor Day parties.