A few months back there was all kinds of fuss in the cocktail world about the “pickle back”. A shot of pickle juice served after a shot of whiskey, lauded by many as a great combination. Pickle juice cocktails were soon to follow, cute but not terribly long lasting as a drinking fad. 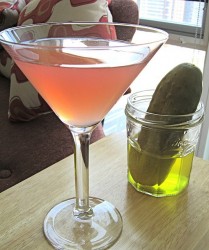 I got ALL of that beat. Way way back in the Summer of 2003, the guy I was dating had gotten me to sit down and watch Office Space for the first time ever. Everything I’d heard before had not prepared me for how little I would be impressed by the film. Sure it was funny, but as I’ve said before, my “office” movie is Nine to Five. The things I remember most from Office Space are Gary Cole and “my O face”.

After I called the Superman III scheme a few seconds before a character mentioned it, he realized the viewing was quickly going downhill, so he shook up a batch of cosmos but the only snack he had was a jar of pickles. We weren’t proud, we were short on funds and we weren’t putting on pants, so pickles it was.

Lemme tell ya, the best ideas are born of desperation! And as it so happens that today is another day when I’m not proud and happen to have a pickle handy, I’m takin’ it back to ’03! Unfortunately, supermarket jar dills work much better than the deli variety, it relies more on salty than sour, but if you’re a homemade pickle person you can easily make them to your taste. So don’t bother with pickle juice with your cocktails, think more about a pickle pairing!